The garden was my children’s domain as well as mine because I wanted them in the garden, connecting with the earth. As they planted seeds, watered growing plants and picked fruit and vegetables, they became attuned to the rhythms of nature.  My kids marvelled at the power packed in a tiny seed because after planting one bean seed, they soon ate handfuls of green beans they picked themselves. They were free to pick and eat beans, snow peas, raspberries, strawberries and carrots straight from the garden as snacks.

Of course, my children complained about weeding especially when it was hot. To solve that problem they dumped buckets of cold well water over each others’ heads and  just generally ran around screaming before attacking weeds. They made games out of their jobs, staged competitions when they picked potato bugs and helped make rhubarb jam and frozen strawberries, currants and raspberries. 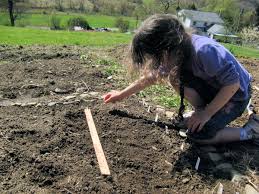 Personally. I love to dig in the warm earth without gloves so I can feel the moist earth as well as inhale its rich aroma. My love of dirt connected with my children’s fascination with dirt, especially the toddlers who gleefully dug with a small plastic shovel while I was free to garden to my heart’s content. Sometimes a baby slept in our old-fashioned buggy under a tree, a toddler ‘worked’ beside me, preschoolers helped me plant and older kids filled watering cans.  Everybody was involved in gardening and eating what we grew at our house. Now, after a lifetime of eating garden ripe tomatoes, corn picked as the water in a pot comes to a boil and huge plates of fresh green beans with butter and salt and pepper, store-bought garden produce tastes bland.

Our gardens were lush and colourful but not gorgeous show pieces.  Only perennial flowers filled my beds because they were tough enough to be stomped and sat on. The gardens were huge, containing many more fruit and veggies than we can eat because we grew enough to give away or barter with to our generous friends and family. Our family even grew enough  for the wild animals surrounding our little acreage because, in their opinion, our garden was their own personal restaurant.

Some years the kids organized a roadside vegetable stand. Everybody became involved and the stand became an exciting adventure, especially to the littlest ones.  A few created signs (just getting them to stand up was hilarious), lugged tables and chairs down a 200m. driveway, and generally ran about yelling excitedly at each other as kids hurried up to the house to get more change, served drinks to the vegetable sellers, bellowed for a bathroom break  if they were stuck done at the road or screamed out to everyone how much money they had made so far.

The mayhem sucked in even Dad and the oldest siblings.

Gardening wasn’t just a hobby, it was a large part of their childhood. As adults, they still love gardening. 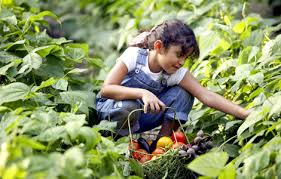 6 thoughts on “Gardening with Kids”