Every single time Michael, my husband, attended a conference or left for a long weekend, something went wrong on our hobby farm. 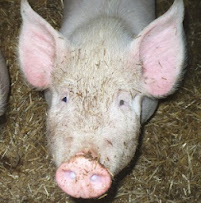 Just last year, my husband was gone for two weeks and a total of ten accidents and catastrophes occurred. All my kids are well aware of this pattern of disasters. As I complained dramatically to a friend one afternoon, disbelief flashed across her face. Grace, Mary and Rebecca all chimed in,

“It’s true. Everything goes wrong as soon as my dad leaves!”

My children and I have ample evidence of our seemingly wild assertion. What follows is part of the disaster list from Michael’s last absence:

1. A repairman red tagged our fuel tank which meant the heating company cancelled oil deliveries until we replaced the tank. This was January, in Canada when the temperature was -20C. We turned the heat to a very low setting, wore sweaters and heated the house mainly with the wood stove waiting for my handy man husband to come home.

2. Our doggy beast, pried open the fridge, ate all the cheese, eggs and meat and broke the seal on the fridge. We had to force the door close with a chair till Michael returned.

3.The palm sander died . I was refinishing the old pine floors with it the slow way.

4. A friend accidentally damaged the 100-year-old stained glass in the front door by pushing the door with his shoulder. I taped plastic over the hole in a weak attempt to keep out the cold wind. It took Michael three days to restore it.

5. 20 cm. of snow fell and my husband is the only one who can drive the tractor which plows our long lane and a couple of our neighbour’s lanes as well.

6. A chair that should have been glued weeks ago, fell apart as a visitor sat on it.

There is further evidence from over the years to back our claim that somehow the universe knows that my husband has left the property. This is a shortened version of our catastrophe list which we attribute directly to Micheal’s twice yearly departures.

A. Wolf, a dog we were dog sitting, ate one of our turkeys, appalling the suburban kids who were camping at our place.

B. The calf escaped to the far field; the kids and I ran through knee-high drifts of snow for over an hour using a bucket of grain as bait.

C. The squirrels moved in and ate all the bird seed.

D. The horse broke out, crossed the road and had all of us running or pedalling bikes as we tried to corner him in a huge field. It took a long time to get a rope attached to his bridle. The horse had fun. We did not.

F. Our wonderful guard dog chased three raccoons up a hydro pole and one blew the transformer as he attempted to climb down. He died as a result. The electrical crew, who had arrived in a huge cherry picker truck, argued whether they really wanted to go up there and rescue the wild raccoons.

“Do you want to go up there George?”

They turned to me and stated,

“Tell you what. We’ll turn your power on and just come back tomorrow after they blow the transformer again.”

Daniel, my son, decided to simply open his upstairs window, point a gun out it and take the raccoons out of their misery. The power stayed on.

Really, when life is this ridiculous, all you can do is laugh.