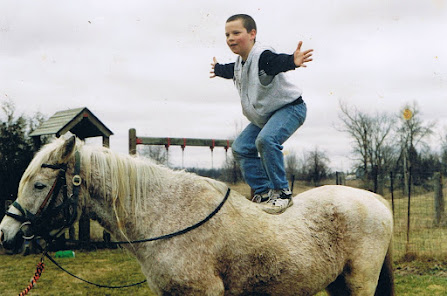 This newspaper article is two years-old, written just before we moved to our new house( New Old house that is- 1886). It gives an outsider’s view of our family and I think that because of that, it is interesting.

Mother of nine reveals secret to her success

Pairing socks for her nine children is no easy task, says Melanie Juneau.

You would think having nine children would turn you into a frazzled wreck with a figure like the Pillsbury Dough Boy and a brain gone to mush. Not necessarily. Exhibit A: Visit Melanie Juneau’s Pakenham-area farmhouse, where the mother of nine is serene in the eye of the hurricane as the winds revolve around her, the CEO of her chaotic domain.

More children are easier than less, she says. “If you have one or two children, you have to be everything for them,” she says. “Family starts with three. I found one child horrendous, two a strain. But three was easy. With three, community starts.”

The babies didn’t stop with three. Melanie had one baby about every 18 months. No regrets about any of them. “Children help you forget what’s not important,” she says.

They are, from youngest to oldest: Lucy, a 15-year-old Grade 9 student; Anthony, 17 and planning to start an apprenticeship as an electrician; Katie, 19, a Carleton University student; Rachel, 20, an early childhood educator; Emily, 23, a science graduate who works for a computer company; David, 24, an arbourist; Mara, 26, a chef and recent BA graduate; Melissa, 27, a sales manager, and Matthew, 30, a carpentry apprentice who is renovating a house he bought with his fiancée.

Melanie was 22 and a student at the University of Regina when she met her husband, Michael. “It was instant attraction. Everyone thought I was going to be a nun librarian,” she says. “He saved me.” For the record: The Juneaus are Catholic. Melanie converted at 19 before she met Michael.

Coming from a family with only two children, it was a shock to Melanie when she met Michael’s sprawling French-Canadian family of eight boys and two girls. Her Protestant grandfather warned her: “At least, don’t have a lot of children.” The advice went unheeded. Melanie spent 15 years of her life either nursing or pregnant or both. (That thing about not conceiving while you’re nursing? So not true.)

At the end of each pregnancy, Melanie always weighed 120 pounds. When she left the hospital, she was 113 pounds. She was invariably back down to about 100 pounds within a few months. At 54, she is still slender as a reed, a genetic gift from her grandmother, another petite woman who bore nine children.

It is never too soon, Melanie believes, to give a toddler a “job” — picking up the toys his younger sibling drops from the high chair, for example. The secret is to delegate, each according to his or her talents, but never to order around like troops. As Melanie puts it: “I always make a conspirator out of everyone.” The older children helped the younger ones with homework. They chop wood, help fix the car, weed the garden, take care of the animals. They know how to barter. “If they’re still treated like kids or overindulged, they don’t have a purpose,” says their mother.

The Juneaus buy salad dressing and ketchup by the gallon and eight 50-pound bags of potatoes, which they keep in a cold storage room along with the carrots and cabbage they grow in the garden on the six-acre farm. They raise three free-range pigs a year, two to sell and one to eat; raise meat chickens and have 12 laying hens. A 12-pound chicken makes three meals — first as a roast, next as a stir fry and finally as soup.

Grocery bills average about $100 a week. Mara, the one who later became a chef, was the cook in the family. “I had Anthony on my shoulder and Mara made pastry for 12 pies,” says Melanie. “Her pastry was flakier than mine, and she was 11.” One non-essential thing got dropped for every child Melanie had. Drawing portraits went first. Baking her own bread went when David arrived. Houseplants (at least those that stood no chance of survival) were gone with the arrival of Melissa. With Mara, it was folding laundry. To this day, Melanie simply leaves each child’s laundry, unfolded, in a basket in their room.

Naturally, in a large family there’s not a lot of money left over for what kids in many other families take for granted. “If you want in-style runners or brand-name jeans, you need to have a job,” says Melanie. At 15, Lucy, whose grade average is 92 per cent, already has a job so she can save up money to go on a school trip to New York City. Resentment has bubbled up from time to time, but rarely lasts, says Melanie. Some of the Juneau children couldn’t wait to move out and live in the city, but most have returned to live nearby.

Four are still at home. They all want more than two children each. Large families live lives of greater interconnectedness.

If you don’t have a lot of money, you’re not an island unto yourself, says Melanie. The Juneau children who go to college or university adapt well to communal life in a dorm or shared house. For starters, they know how to cook and clean up after themselves.

Melanie has a few tips on raising a large family:

1. Ignore the bad and praise the good.

2. Don’t get upset over messes.

3. If it’s not broken, it probably should be

. 4. Bored children never stay bored for long, so don’t worry about it. They will pick up a book or a pencil. (The Juneaus went for two years without a TV set.)

“The only thing that will kill you with nine kids is pairing socks,” says Melanie. All of the socks in the Juneau household are black. Happy Mother’s Day, Mrs. Juneau. © Copyright (c) The Ottawa Citizen http://www.ottawacitizen.com/Melanie+Juneau+juggling/3001906/story.html#ixzz0nKjgfidR

19 thoughts on “A Newspaper Article on Us”